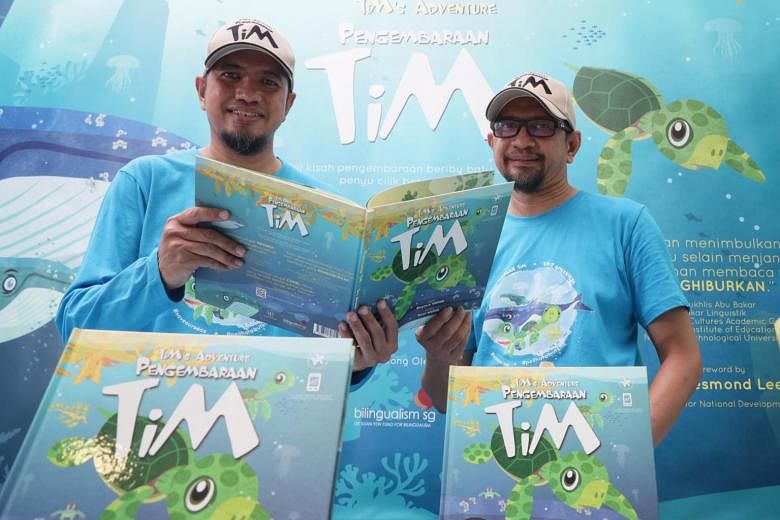 SINGAPORE – The hawksbill turtle – one of two turtle species native to Singapore – is one of eight marine animals to have a voice in a new bilingual children’s picture book aimed at highlighting local biodiversity and marine life.

The story, aimed at preschoolers, follows the journey of a hawksbill turtle named Tim from the Nuns’ Islands and vice versa.

There is a marine turtle hatchery on Small Sister Island, a protected area zoned for conservation and research managed by the National Parks Board (NParks).

The book and various multimedia elements are created by brothers Rhaimie Wahap, 54, and Rizal Wahap, 47, with support from the Lee Kuan Yew Fund for Bilingualism.

Published in Malay and English, the children’s book was launched at an event at the Visual Arts Center on Friday, December 24, attended by National Development Minister Desmond Lee.

Mr. Lee, who wrote the preface to the book, also appears in the animated video to talk about conservation and biodiversity issues for young children.

“Singapore is a small island. But we have around 120 species of reef fish, over 200 species of sponges and 12 species of seagrass in our waters,” he said.

“I am pleased that this book is helping to educate our young readers about the importance of protecting our marine life in Singapore.”

Mr Rhaimie said he was inspired to write the book after realizing that there aren’t many local picture books for children that focus on the rich biodiversity and the efforts of Singapore conservation.

Mr. Rizal, a self-taught artist, has worked on illustrations, animation and AR elements. It took a year for the book and its various parts to come to fruition.

Mr Rhaimie said: “For a very long time, I was impressed with how sea turtles can find their way back to breeding. Initially, I wanted the story to take place in Terengganu, Malaysia, but my editor told me we had sea turtles laying eggs here on the beaches in Singapore. “

“We want to let young children know that we have a rich biodiversity here in Singapore and promote a love of nature,” he said, adding that he hopes the book will be the first in a long series. .

Mr. Rhaimie had composed a song Nama Saya Tim (My name is Tim) for the story which he hopes will be useful if children and educators perform a play based on the book.

Ben can read | The spin-off