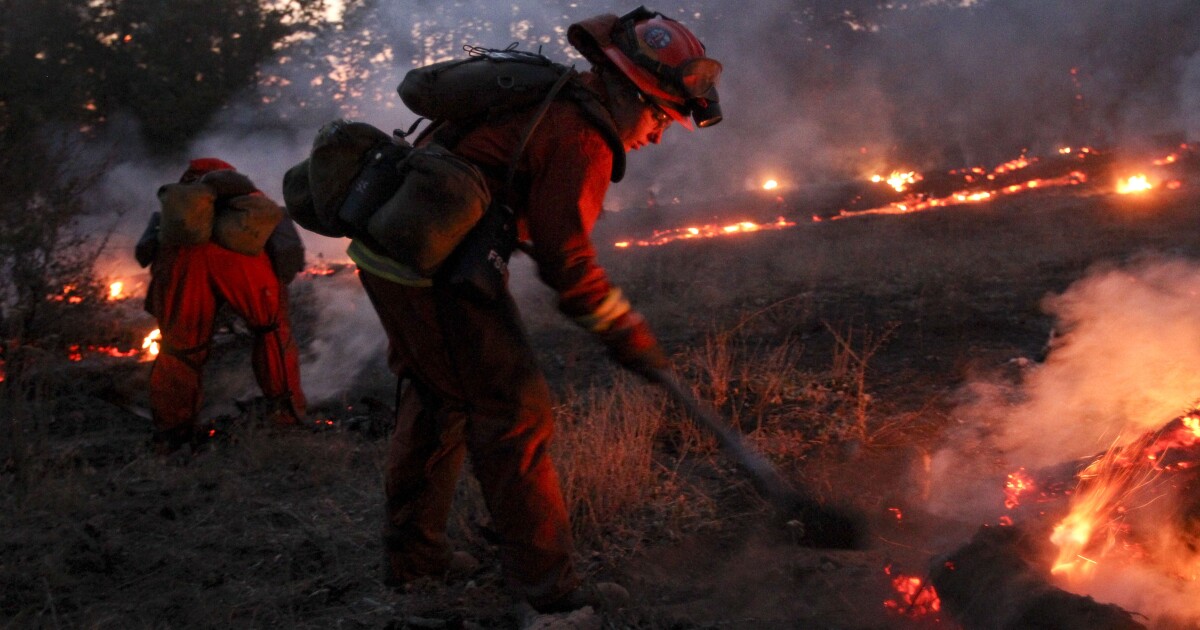 Hello and welcome to the LA Times Book Club newsletter.

This fall, our book club is on fire.

Tuesday we go to the frontlines of deadly California wildfires with the author Jaime Lowe, including “Breathing Fire” tells the story of women firefighters who risk their lives for a few dollars a day. Please join our live event at 6 p.m.

Next month we read “The Boys” and welcome the director Ron howard and actor Clint howard to October 15 to discuss their childhood in some of the most popular TV shows of the ’60s and’ 70s. The Howard Brothers will be joining our first in-person book club since February 2020. You can watch the discussion on the rooftop terrace at LA Live – or connect virtually to watch from home. Get tickets.

Our fall reading list also includes the Pulitzer Prize winner Nikole hannah jones and “The 1619 project: a new origin story. “This collection of essays, fiction, poetry and photography builds on his New York Times Magazine project and will be released in November.

Then in December we read “Those precious days“by the best-selling author and owner of an independent bookstore Anne Patchett, whose previous books include “The Dutch House” and “The Patron Saint of Liars”. Stay tuned for more details.

Before Tuesday’s book club, reporter Jaime Lowe shared ideas on her research and reading list while working on “Breathe fire” since five years.

The biggest challenge of writing this book: The process is to live intimately with a subject for years and be linked to him forever. Probably the biggest challenge with this book was reading and hearing about conditions in prisons and prisons – such as torture, sexual assault, criminal behavior by correctional officers, medical negligence perpetrated on those in charge. were and are incarcerated. It was difficult to recognize that this was and is the reality for so many separated people from society.

Number of people interviewed: Wow, I have no idea! Basically, I spoke with at least 50-75 female incarcerated firefighters, a dozen or more correctional officers, a dozen firefighters at CalFire, Los Angeles County Fire Department and USFS, experts in climatology, fire analysis, criminal justice, California history, California law, law professors, family members of incarcerated persons. If I guessed maybe 300 people, but I feel like I’m looking at a jar of jelly beans and estimating.

Kilometers traveled: I don’t quite know. I regularly drive back and forth in California and try to collect as much reporting as possible, in all directions. I would say at least 5,000 miles, which makes me feel irresponsible when it comes to climate change, but also California is huge and I’ve been as far north as Camptonville and Paradise, and I’ve been on many trips in Lancaster and Palmdale and in the San Diego area and was used regularly on fire routes in Malibu and Topanga.

Most Memorable Character: I’m going to dodge this question because every woman I’ve written about is memorable and amazing for a variety of reasons. But one of the women I described in the book – Selena – told me how she would catch lizards in Malibu and trade them with other incarcerated women for 25-cent noodles. They kept the lizards as pets for a few hours, then released them into the mountains. So I would say the lizards because I loved the idea of ​​both Selena’s hustle and bustle and also this innate need to care for a pet, to have comfort, to relate to the natural world in which they were immersed. So, the lizards!

Most poignant moment: This book began with a tragic death and after becoming close to Shawna Lynn Jones’ mother, Diana Baez, I watched her live and evolve with grief. I watched her go through waves of sheer, sheer grief and saw how loss and death completely changed Diana’s life.

Most useful books or resources during your research: There are at least 30-50 books that I could list here for a variety of reasons. A random selection of these books would be “City of Inmates” by Kelly Lytle Hernandez and “Are Prisons Obsolete?” by Angela Davis.

Last book that kept you awake at night: “100 Boyfriends” by Brontez Purnell, which is a very nocturnal book.

The TV shows that got you through the pandemic: I desperately want this answer to be different from what I’m about to say, but … watching and seeing “New Girl” again was extremely calming and I turned to these characters as friends in extremely weird ways. and unhealthy. But sometimes I laughed myself to sleep because of Winston’s bird shirts or Nick’s self-proclaimed plumbing. … Also review “The Wire” and “Succession”.

Something you found out about yourself last year: I found out that I needed a 12 step group for my “new girl” addiction.

Craziest thing you’ve done to have a story: I hung out with hundreds of thousands of bees in the central valley without a bee costume because… I am not very smart and I was deeply unprepared. But I sat there, keeping my body and my breathing very still, and I didn’t get stung while interviewing industrial beekeepers! And I got to taste some fresh honey, which was both rude to the bees and absolutely indescribable for the purity of the sweetness.

Your next project: I’m still working to figure this out. But if anyone has good ideas, I’m open to them.

Tuesday Lowe will be in conversation with the Times columnist Erika D. Smith and the virtual event will be broadcast live on Twitter, YouTube and Facebook. Please share your questions and comments in advance by emailing [email protected]

On Mississippi Street: The San Francisco house where master of science fiction Franck Herbert wrote “Dune” is now on sale, via SFGate.

Longmire returns: Craig johnson says a missing person poster in a Crow reserve library that inspired “Daughter of the Morning Star,” her latest novel by Sheriff Longmire. “It was a simple computer copy with the face of a young woman, bright-eyed and smiling and now … gone”, Johnson says. “The words were desperate and pleading and a reward was posted. “

Refugee stories: Rabih Alameddine is not afraid to add humor when tackling the humanitarian crisis in Syria in his new novel, “The wrong end of the telescope”.

Book price: The list of nominees for the National Book Award for Fiction 2021 includes Lauren Groff for “Matrix”, Richard Powers for “Perplexity”, Anthony doerr for “Cloud Cuckoo Land”, Honorée Fanonne Jeffers for “WEB Du Bois’ love songs” and Robert Jones Jr. for “The Prophets”. Browse the full list of nominees across all categories. Also: Nancy Pearl, the Seattle librarian who started the Common Read movement, will receive the Literary Prize 2021 for exceptional service.

Gold ticket: Netflix acquired the works of Roald dahl, the author of “Charlie and the Chocolate Factory” and other famous children’s books. The deal paves the way for Netflix to bring the author’s entire catalog to screens.

Maul cops: In an excerpt from “Fuzz”, science writer Marie Gardon writes about “Crime Scene Forensics When the Killer Is Not Human” at the New York Times. At September 30 Roach will be in conversation with the columnist Patt morrison to the Times’ exchange of ideas. Get tickets on Eventbrite.