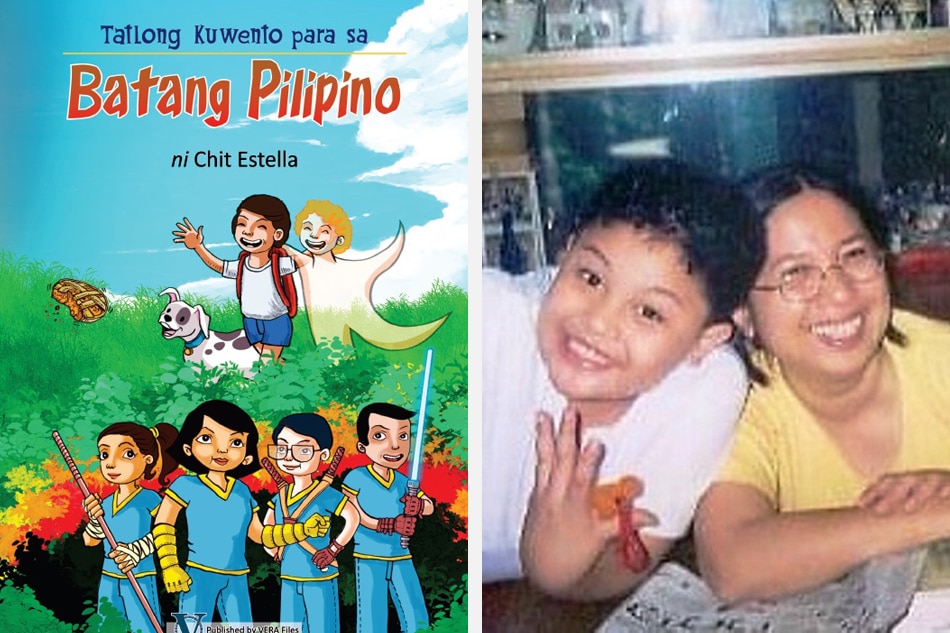 Chit Estella as a children’s storyteller

The cover of the book “Tatlong Kuwento Para sa Batang Pilipino” by Chit Estella. The photo on the right shows Estella with her nephew Gino. Handout

Chit Estella, known for her hard-hitting reporting, high ethical standards and impeccable integrity, was mourned by her family, colleagues and friends when she died in a freak car crash.

But 10 years later, her voice cannot be stopped with the publication of a children’s book of which she is the author. The stories in the collection were originally given as gifts to his nephews and niece.

The book “Tatlong Kuwento Para sa Batang Pilipino” is published by Vera Files, of which she is one of the founders. As for her husband Roland Simbulan, Estella only kept a set of hard copies of the stories. This was found in a baul (wooden chest) among his papers at home.

He said: “When she gave these stories to her pamangkins Gino, Carlo and Helene – I can’t remember the exact year of that Christmas – they were hard copies bound with thick plastic covers. It wasn’t until last year’s long lockdown while doing housework that I found and read each one. “

This year, since it is the 10th anniversary of Estella’s death, he thought to commemorate the occasion by having the three short stories of the manuscript published in one book. He received the full support of the ladies Vera Files, Estella’s best friends.

The 82-page book, with a cover by Fidel L. dela Torre and illustrations by Jeanet Herbosana-Simbulan, will launch on August 19 via Zoom in on what would be Estella’s 64th birthday, instead of her death anniversary. . The launch will be hosted by Vera Files, media friends and colleagues of Estella at the Department of Journalism at the College of Mass Communication at the University of the Philippines.

Simbulan said: “It really is more appropriate to remember her on a happy occasion like her birthday, not her death anniversary. The Chit I knew would have preferred her that way as well.
As the Trese graphic film series captures the imaginations of Filipinos, what is the relevance of Estella’s children’s stories that also pick up characters from the rich mine of Filipino mythology?

“Chit mixes up aspects of our local popular culture like aswang and others that we generally like to use to scare children with the realities of our time. This is why the book is also aimed at adults. He tells children that the things that scare us are not what they seem if we understand them better. And that everywhere, whenever there is oppression, there is finally also liberation. But only if we understand the situation and all work together to resolve it, ”he said.

When asked why the author chose the underworld or mythical creatures to make his point, Simbulan, a retired professor at the University of Manila, replied, “Because that’s really part of it. of who we are as Filipinos and as human beings. Our deep spirituality, which we pass on to our children, allows us to believe in mythical creatures who can guide our lives, for better or for worse. But our liberation from all oppression is really in our hands. This is my own interpretation of his point.

When also asked what Estella looked like as a person, partner and journalist / storyteller, Simbulan said: “In my gratitude for her posthumously published book ‘A Reader on Media Ethics, People’s Issues and Governance’ in 2012, i described her as ‘my wife, best friend and comrade.’ His writings – always with a pro-Filipino and pro-poor perspective – represent the full force of his compassion and outrage at the realities around us.

He continued, “She was truly the very first angel I met on earth who inspired me and others how to live a fulfilling life on a journey of love and compassion for others. I remember now that she said to me once out of the blue, as if she had a premonition: ‘Roland, pag nauna ako sa iyo, mag-asawa ka muli dahil ayaw kitang maging malungkot (if I die before you have to remarry because I don’t want you to be alone). ‘ It is only now that I remember the incident that I then dismissed.

He shared another anecdote involving Estella as a writer. “She edited my father Dante’s book,“ The Modern Principalia: The Historical Evolution of the Philippine Oligarchy, ”published by UP Press in 2005. In the original draft of My Father’s Thanks for his book, he described Chit as his “talented daughter – in law. ‘ Chit modestly modified the sentence by deleting “talented”. It was the essential Chit.

(VERA Files is published by seasoned journalists who take a closer look at current issues. Vera means “true” in Latin.)