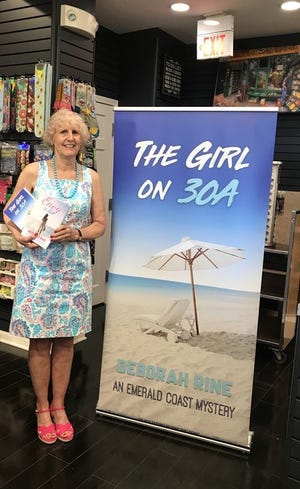 â€œI discovered that diving into my own fantasy world was a balm for my soul,â€ said Rine. â€œI lectured at women’s groups and in high school writing classes on using creative writing as a way to deal with stress. Usually you hear that journaling is a good technique for solving personal issues. I suggest writing a poem, song, or short story can ease the mind. “

Since then, Rine has authored a number of books, including a series of detective stories set along Scenic 30A in southern Walton County. The Emerald Coast Mystery series includes “The Girl on 30A”, “Envy on 30A”, “Missing on 30A” and its latest, “Double Trouble on 30A”, which deals with identical twins and the science of epigenetics.

Epigenetics is an emerging field of science that studies hereditary changes caused by the turning on and off of genes without any change in the body’s underlying DNA sequence, according to a Wikipedia definition provided by Rine.

â€œI was a substitute teacher in an AP biology class and the students were to watch a video on epigenetics. I was blown away by the possibilities that this science portends for humanity,â€ said Rine. â€œMy character, Claire, is surprised by the arrival of an identical twin sister. They had been separated at birth. The twins have identical genes, but they are not exactly the same. Why not? The genes can- do they change? “

As Claire and her twin go through their difficult relationship, there are flashbacks to their grandmother’s childhood during the Depression of the 1930s. It all feels very heavy, Rine said, but it is interspersed with sunsets. on the beach, dining at Bud and Alley, shopping at Mercantile and jogging around a coastal dune lake.

Find your home after traveling the world

Rine lives in Freeport with her husband, Larry, and two Labradors. She grew up in Evanston, Illinois, Bronxville, New York, and Bethesda-Chevy Chase, Maryland. At 14, she spent a year in France with a French family. After high school, she lived with a family in Sweden.

After earning a BA and MA in French Literature from Northwestern University, she taught in Winnetka, Illinois. After marrying a Frenchman, she moved to Milan and then to Verona, Italy. Subsequently, his family moved to Brussels, Belgium, and then to a Parisian suburb. Upon her return to the United States, she taught French in high school.

She has three children and 14 grandchildren, has been featured on multiple occasions in The Chicago Tribune and The Gazebo News. But she is no longer married to the Frenchman, she said.

â€œI speak French, Italian, Spanish, but most of the Swedish are gone. My French husband too,â€ she joked.

She and Larry “tripped over the 30A band by accident several years ago,” she said. â€œWe were escaping the Chicago winter. Like many tourists, we were charmed by the beautiful white sand, the turquoise water, the charm of the cities and the kindness of the people. For several years, we have rented different houses along the 30A during the month of February. . Last March, we decided to sell our Chicago home and move here permanently. “

Learn more about her experiences traveling across Europe as a child and young woman on her blog, DCRine.blogspot.com/.

â€œI mainly wrote mysteries with a strong female protagonist and a romantic touch,â€ she said. “My 30A detective novels are unique in that they offer an intriguing and swift mystery, a touch of romance, and the beauty and charm of the Emerald Coast.”

His first three books, which are murder mysteries, are set on the North Shore of Chicago in a friendly village. They are “The Lake”, “Face Blind” and “Divergent Deaths”.

â€œRaw Guiltâ€ is a contemporary female novel that deals with the accidental death of a child, the redemptive grief of the mother, and the driver of the car that killed the little girl. “Verona with Love” is a kind of memory, as it deals with her life in Verona, Italy, but lived by an imaginary family.

Writer’s Block is not something Rine has known.

â€œI usually walk with my dogs in the morning and imagine the chapter for the day,â€ she said. “Then I go home and write. I often start by rereading and editing the chapter from the day before.”

Her advice for aspiring writers: “Do it! As they say, writing is 10% imagination and 90% sweat.”

She enjoys encouraging others to write. In March 2015, she “reinvents herself” as a literary motivator and consultant.

â€œI spoke at high school creative writing classes about ‘writing strategies’ and ‘the power of the imagination’,â€ Rine said. â€œWith prompts, the students wrote imaginative and creative prose. They were a lovely and interactive audience. “

Rine is currently working on a fifth novel 30A. She teases that Claire will be faced with the sudden death of her husband on their flight home from their honeymoon. As the story unfolds, Claire will realize that she never really knew her partner. He had lied about his name, his background and his job. Her dilemma is that she misses the man she loved, but is filled with anger at his deception.

Her books are available at Sundog Books in Seaside, Hidden Lantern Book Store in Rosemary Beach, Footprints Gift Shop in Miramar Beach, North Bay Mercantile in Freeport, and Amazon.com. His website is Deborah-Rine-Author.com.

Top 10 Movies Based On Books You Read In English Class

HECS-HELP loans increase, if you make a voluntary payment