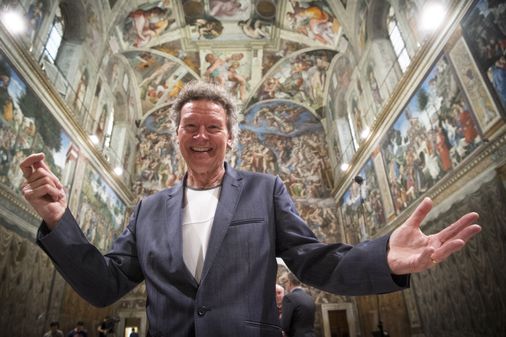 Harry Christophers on Portugal, his diary and “the opportunity to read tons of books”

Harry Christophers has been Artistic Director of the Handel and Haydn Society since 2008. When he returns to Symphony Hall November 26-28 to conduct “The Messiah,” one of the world’s best-known choral works and a long-standing tradition of the Boston holidays, it will be his 13th and final season as artistic director. “Twelve years is a long time to be an artistic director of any organization, and I felt it was about time,” Christophers, 67, said on a Zoom call from England. “The [Handel and Haydn Society] is in a good position and I am confident to hand it over to someone else. Christophers, who is married and has four children and two young grandchildren, said he plans to spend more time with his England-based choir and orchestra The Sixteen, who have been on a “choral pilgrimage”, he joked, giving numerous shows throughout The UK. “We play cathedrals and abbeys. . . play music written for these fabulous 16th century buildings that fits them like a glove. And even though he is stepping down as art director, Christophers has said he’s not quitting H + H completely. “I’ll be back to do a gig every now and then. . . but I will focus on Europe, ”he said. We caught up with Christophers – who was born in a pub in the Weald of Kent (just south of London) and now lives with his wife, Veronica, and their Cockapoo, Saffron, in Otford, a small village in Kent – to talk about everything trip.

The Algarve. We have been going to Portugal as a family since the children were very young. We go to the same small fishing village west of Lagos. There is nothing to do except enjoy the sun, the sand, the sea, the fresh fish and the wine. So perfect for recharging the batteries after months of concerts and travel. It is also a quality moment with the family and the opportunity to read lots of books.

Favorite food or drink while on vacation?

Freshly caught sea bream of the day, simply grilled, no frills, no added sauces, just served with a few boiled potatoes and buttered zucchini [zucchini]. I’m not a fan of sparkling beers, but in Portugal I love a pint of Sagres. There is a nutty flavor and it just slips; a treat at the end of a hot day.

Where would you like to travel but haven’t done so?

I really want to see Luxor [in Egypt], on the site of the ancient city of Thebes, and the Valley of the Kings. I read classics in college and have always been fascinated by temples and these pyramids. What skill and art.

An item that you can’t leave home without when traveling?

My journal. I still have my Filofax with everything handwritten and I just like to remember what’s coming up, whether it’s a gig, seeing friends or Arsenal’s next home game.

Ray. I hate to bother people when I need to pee!

I must admit that as a child we never went on vacation. But I remember my first trip to London when I was 10 years old. I was a chorister at Canterbury Cathedral and four of us went to sing with the choir of Saint Paul’s Cathedral for the service of Saint Cecilia and we spent the night in the Archbishop’s Chapel. Lambeth Palace. The breakfast was amazing!

Watch old pop videos on the British Airways Entertainment Channel. The Rolling Stones in Cuba, The Who in Kilburn, documentaries on Led Zeppelin, etc.

Arrive early and travel as light as possible. Nothing worse than having to lug around a heavy suitcase.

from Disguised Dogs to Striking Out